Deepfield reports that Google set a new record in North America: during an average day 60% of all internet users use Google servers. The last comparable large measurement in 2010 came only 6% of the Internet traffic through Google, this is now an average of almost 25%.

Deepfield: “Based on measurements of end device and user audience share, Google is now bigger than Facebook, Netflix and Twitter combined”. The large increase in internet presence is due to the usage of thousands of Google servers by internet providers around the world.

The graph below shows the average percentage of all devices (tablets, smartphones, computers) in North America that share data through Google’s infrastructure at least once per day. 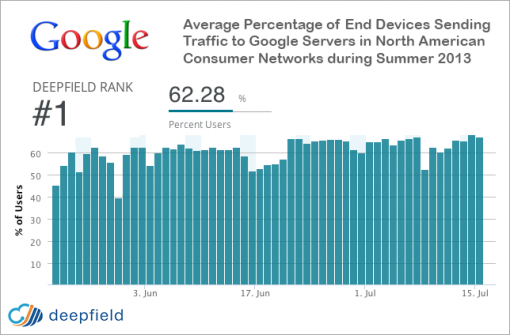 Only Netflix provides more data transfers, but only during prime time and the cache update period in the early morning.

Read more about the record here.