One of the great, new features in the new version of Google Analytics interface ‘Assisted Conversions.’ This feature allows users to see what sources worked together to create a conversion. This is pretty big stuff, because in previous Google Analytics versions you could only really observe the last source. Now, we can actually see that multiple mediums (e.g organic, cpc, social) contribute to a conversion together. In other words, the mediums ‘assist’ each other.

To illustrate the point, here’s an example (illustrated in the graphic above):

In previous versions of Google Analytics, the conversion source for this transaction would have been ‘direct.’ However, in the new version of Google Analytics, we can see both the original source (AdWords) and the final source (direct) for the example above. This is important, because it allows us to better determine effectiveness and thus, value, for each medium. With this knowledge, we can work towards positive ROI marketing strategies, which make everyone happy.

Data Comes Out of Hiding 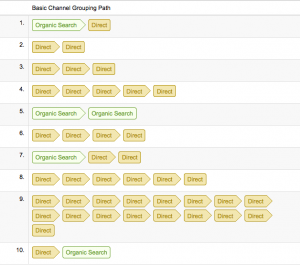 In the image to the right, you’ll see a list of the top ten. In other words the top ten ways a visitor used a combination of mediums in order to accomplish a conversion.

Though maybe it doesn’t seem like it, this image actually says a lot about user behavior: it’s very rare that a visitor converts in the first go. Rather, visitors generally convert after multiple visits. In other words, people take their time when deciding to do things online.

Interestingly, in the image to the right, we notice a few cases where ‘organic’ was an original source, followed with ‘direct.’ In such cases, a user found the website in question using Google Search. After visiting the site, the user then returned at a later time by entering that site’s exact address into his or her browser.

This is significant because in previous versions of Analytics, this data would have been shown as driven by ‘direct’ visits. Now, we can see that organic traffic actually does play a role in driving conversions…it’s no longer hidden by several layers of user visits. For all of the SEO practitioners out here, this is great news, because sometimes showing SEO value can be difficult.

If you’re not already looking at Assisted Conversions on a regular basis you should. Integrate it into a monthly report, peek at it periodically. Whatever works. The reason is because looking at this data really lets you understand marketing value. This is great, because it then lets website owners allocate effort and resources to only those channels that work best. In other words, ‘keep doing what works.’

Have something to say about ‘Assisted Conversions?’ Let us know in the comments below.